Ernst Theis, a native of Upper Austria, studied in Vienna at the Academy of Music and Performing Arts (today’s University of Music and Performing Arts Vienna). His first appearances as a conductor were with the orchestra Österreichische Kammersymphoniker [Austrian Chamber Symphony]; as this ensemble’s artistic director and general manager from 1991–2003, Theis devoted considerable attention to classical modernism, contemporary music and—later on—Viennese classicism. This period saw the recording of two CD series: one was a four-issue series for Cantate – Musicaphon Records dedicated to classical modernism with works by Arthur Honegger, Darius Milhaud, Bohuslav Martinů and Erwin Schulhoff, and later on he recorded what still remains the world’s only complete recording of Joseph Haydn’s piano concertos for the label ARTS MUSIC. Over the course of his activities with the Austrian Chamber Symphony, with which he maintained a concert series at Vienna’s Konzerthaus for many years and appeared at various festivals, he was also asked to substitute on short notice at the Vienna Volksoper—which thereafter hired him; he subsequently spent nearly four years at this opera house as a conductor.

From 2003 to 2013, Theis served as head conductor of Staatsoperette Dresden, which was embroiled in a serious crisis when he arrived. His thoroughly visionary conceptual approach to their artistic work together paved this theatre ensemble’s way into the recording market; he began recording with them for the German label CPO in 2005, performed with them at renowned concert halls such as the Cologne Philharmonie, Hamburg’s Laeiszhalle and the Brucknerhaus in Linz, and also took them several times to the Kurt Weill Fest in Dessau. Ultimately, Staatsoperette Dresden went being a potential candidate for closure in 2003 to awaiting construction of a new theatre building in 2012.

In 2013, after 10 years at the helm, Ernst Theis left the Staatsoperette Dresden in order to have time to devote himself to new ideas. He went on to make a number of successful debuts and also frequently substituted at short notice; for the Bochum Symphony, for example, he took over a programme including Sibelius’s Fifth Symphony, Remain Chicago by Mark-Anthony Turnage, and Mozart’s Piano Concerto No. 21 for an ill colleague on just 17 hours’ notice. But he has also remained true to established concepts like his project RadioMusiken, in which he is producing recordings together with Mitteldeutscher Rundfunk (Central German Broadcasting, MDR) over a period of several years, as well continuing to pursue his focus on music of the Strauss dynasty that he developed comprehensively while in Dresden and for which he is frequently requested. Today, Ernst Theis covers an artistic range that runs from early Viennese Classicism to the avant-garde, working successfully with numerous orchestras on various continents. 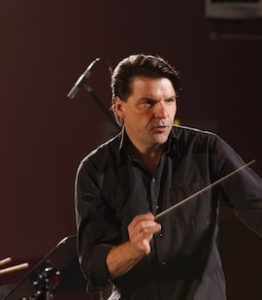