Born in Berlin, the young tenor Florian Hoffmann got his singing and piano education at the Peter Cornelius-Konservatorium in Mainz, Germany, and won an award (Förderpreis) of the Kultusministerium Rheinland-Pfalz in 1995. Subsequently he studied at the Hochschule für Musik Hanns Eisler in Berlin with Prof. Renate Faltin and Kammersänger Reiner Goldberg, where he sang roles including Albert Herring in Benjamin Britten’s opera of the same title and Florville in Rossini’s one-act play IL SIGNOR BRUSCHINO in Hochschul-productions.

After he participated in the first Ruhrtriennale in Essen in „Deutschland, deine Lieder“ in summer 2002, he sang Iwanow in Lortzing’s ZAR UND ZIMMERMANN in the Fürstentum Liechtenstein as well as Alberto in Rossini’s L’OCCASIONE FA IL LADRO in Berlin.

In addition, Florian Hoffmann has an extensive concert- and opera repertoire. He sang amongst others Beethoven’s C Major Messe, Rossini’s Stabat Mater as well as Bach’s Johannes-Passion. Furthermore he closely collaborates with the Konzerthaus Berlin, where he sang in Paul Hindemith’s HIN UND ZURÜCK and Ernst Krenek’s VERTRAUENSSACHE in January 2004 as well as regularly in „Papageno spielt auf der Zauberflöte“.

Since 2005/2006 Florian Hoffmann is a member of the Staatsoper Berlin, where he already performed within a coproduction as Aret in Haydn’s PHILEMON UND BAUCIS in spring 2003 and as 1. Tourist in the world premiere of Hans Zender’s CHIEF JOSEPH directed by Peter Mussbach in June 2005. 2005/2006 he gave his debut as Pong in TURANDOT, as Steuermann in Wagner’s DER FLIEGENDE HOLLÄNDER and as Hirt in TRISTAN UND ISOLDE, conducted by Daniel Barenboim, as Raoul de St. Brioche in Lehár’s Operette DIE LUSTIGE WITWE and as Basilio in Mozart’s LE NOZZE DI FIGARO.

During the Festtage 2008 at the Staatsoper Unter den Linden he made his successful debut as David/MEISTERSINGER VON NÜRNBERG under Daniel Barenboim.

In June 2009 he made his acclaimed role debut as Pedrillo in the new production of ENTFÜHRUNG AUS DEM SERAIL at the Berliner Staatsoper under Philippe Jordan, directed by Michael Thalheimer highly praised by press and audience alike.

In August 2009 he made his successful debut at the Bayreuther Festspiele  as Augustin Moser in Katharina Wagners “Die Meistersinger von Nürnberg” and as Erik by Richard Wagner for Children – The Flying Dutchman (Musical director: Christoph Ulrich Meier, Producer: Alvaro Schoeck). 2010 he made very successful concerts with the Konzerthausorchester Berlin under Lothar Zagrosek and take part as Dr. Blind in the new production DIE FLEDERMAUS at the Berliner Staatsoper under Zubin Metha and Tapioca in the new production of L’ETOILE under Sir Simon Rattle.

In December 2010 Florian Hoffmann made his very successful debut as Tom Rakewell in a new production of THE RAKE’S PROGRESS under Ingo Metzmacher.

2011 he made his debut as Andres in a new production of WOZZECK under Daniel Barenboim at the Staatsoper Berlin.

In the season 2015/16 he sang the Young servant in Elektra in two productions at the Staatsoper Berlin and at the Gran Teatre del Liceu Barcelona. He also sang David in DIE MEISTERSINGER VON NÜRNBERG under Daniel Barenboim. At the Staatsoper Berlin, he was part of the following productions: as Don Basilio in Le nozze di Figaro, as Andres in Wozzeck , as Malcolm in Macbeth and as Kudrjas in Kát’a Kabanova.

The season 2017/2018 starts with the exciting production of „ZUM AUGENBLICKE SAGEN: VERWEILE DOCH! »Szenen aus Goethes Faust«“ with music by Robert Schumann and text excerpts by Johann Wolfgang von Goethe’s Faust. This is followed by his debut at the Royal Opera House Covent Garden in 2017/2018 and a guest engagement at the Opera La Monnaie Brussels in 2018/2019 . 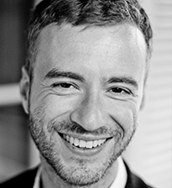