Roman Shulackoff studied at the Gnessin Academy of Music in Moscow with Konstantin Lisovsky. He made his professional debut as Lensky in EUGEN ONEGIN 2003with Novaya Opera Moscow and was invited to join the company. His debut at Bolshoi Theatre as Tamino in DIE ZAUBERFLÖTE followed in 2005.
Roman Shulackoff has since sung roles such as Shuisky in BORIS GODINOV, Tamino in DIE ZAUBERFLÖTE, Bayan, Finn in RUSLAN AND LUDMILA, Alfredo in LA TRAVIATA, Macduff in MACBETH, Likov in TSAR’S BRID, Pang in TURANDOT, Nemorino in L’ELISIR D’AMORE, Sinodal in DEMON, and the tenor part in Verdi’s Requiem.
2008 he made his debut at Staatsoper Stuttgart as Lensky. 2009-2012 he sang Alfredo in LA TRAVIATA, Pelleas in PELLEAS ET MELISSANDE, Chevalier de la Force in DIALOGUE OF CARMELITES in Stuttgart.
In 2009 sang the role of Alfredo at the festival in Groningen, Holland. In the same year he took part in a gala in memory of Luciano Pavarotti in New York, USA at the Lincoln Center. The concert was broadcasted in the US on TV. In 2009, 2011 appeared in The New Zealand National Opera as Lensky and Macduff. 2010 he sang Don Jose in Toulon Opera. 2008 -Copenhagen, Denmark, the tenor part in „The Bells“ by Rachmaninoff with the Royal Ochestra.
He has performed Lensky in EUGEN ONEGIN (Bolshoi Theatre, Moscow, Riga, Opera Bastille, Paris, Tokyo, Stuttgart, Metropolitan Opera, New York, cover, La Scala, Milano and Peking), Don José in Carmen ( Metropolitan Opera, New York, cover), Alfredo in La Traviata (Noord Nederlands Orkest and Novaya Opera, Moscow), and Nemorino in L’elisir d’amore (Novaya Opera, Moscow and Metropolitan Opera, New York, cover).
2011 preformed the role of Andres in The Bolshoi. The show was broadcasted on Mezzo and DVD recording appeared later.

2013 he took part in the festival „The Opera stars“ in Russia where sang Shuiskyi in Boris Godunov and Lensky in Eugeny Onegin as well as Alfredo in LA TRAVIATA at „Michailovsky International Music Festival”. And he took part in the new production of PRINCE IGOR with director Yuri Lubimov, which was also broadcasted on Mezzo.tv, as well as Pelleas in Concert Hall of Tchaikovskyi with Russian National Orchestra, conductor Paul Daniel.

In July 2014 he sang Lykov in the TSAR’S BRIDE in Lincoln Center,NY. Also in 2014 Roman Shulackoff performed „Dichterliebe“ by Schumann in Beethoven’s Hall in Bolshoi Theatre of Russia and Mackduff in MACBETH in Toulon,France.

In 2015 he performed the role of Samozvanez in BORIS GODUNOV by Mussorgskyi at Karlsruhe Staatsoper. He also opened the festival Prahova Classic Nights in Romania in October 2015 with Dichterliebe by Schumann and Mörike songs by Wolf.
High lights of recent concert appearances include Rachmaninoff’s The Bells with Estonian National Symphony Orchestra and with the Danish National Radio Symphony Orchestra.
Roman Shulackoff has worked with directors and conductors such as Dmitri Tcherniakov, Graham Vick, Achim Freyer, Alla Sigalova, Stuart Bedford, Tomas Sanderling, Ery Klas, Nikolay Nekrasov, Alexandr Vedernikov, Maurizio Benini, Jiri Belohlavek, Yuri Aleksandrov.
Roman Shulackoff is recipient of the 1st Prize at the International Young Singers Contest Bella Voce in Moscow (2001), the 3rd Prize at the International Hans Gabor Belvedere Singing Completion in Vienna (2007), and both the 1st Prize and the Audience Prize at the Second International Singing Competition Strasbourg (2008). 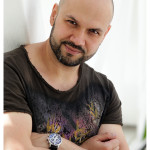